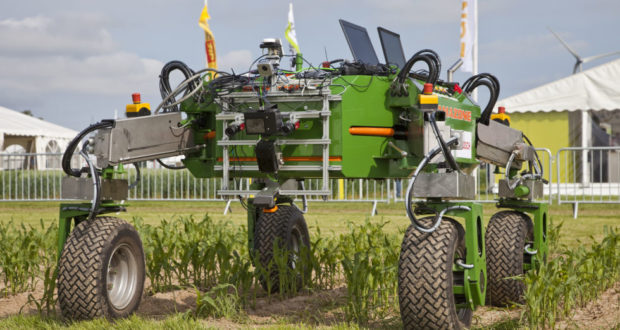 The fields are full of weeds, get your robots out!

A Tesla car recently set a landmark record of crossing the united states on electric power, travelling from Los Angeles CA to New York NY. Amazon have launched prototype drone delivery systems to send packages out to clients from warehouses using the sky. Google have been dabbling with driverless technology for ages now. The world is becoming increasing dependent on technology, our lives are becoming increasingly dependent on technology.

Whilst there are bound to be people that claim the old ways are better (and we are sure that in some respects that is true) it is our belief that gradually things are getting better as technology becomes more sophisticated. Our lives are becoming easier. Farmers will be the first to advocate the huge improvements they have seen across the farming industry. Increased yields, smarter farming and more precise data collection have all contributed to happier farming practices everywhere.

Historically if you had a pest problem on a farm you had a choice. Kill it individually or use a widespread solution such as spraying herbicide to counter the problem. The problem with the first option was it was painstaking and time consuming. The problem with the second is that it costs money, it can damage yields and the savvy consumer at the end of the production line doesn’t like the idea of consuming a crop coated in herbicide. But there simply weren’t enough hours in the day to extract each individual weed so farmers were often pushed forcibly towards the second option.

Now though, there is a new way. One we have touched on in previous articles but will explain fully here. The agricultural manufacturers have created drones that work hand in hand with small unmanned robots. This has revolutionised the way weeds are dealt with as a whole for 3 reasons.

The drones are relatively inexpensive, uploading software to them can be costly (it is worth checking smart agriculture forums for the feedback on which software to upload as although some may be dearer they may also be significantly better) and the robots themselves can be a hefty upfront cost.

So, we have addressed the costs, the benefits and when compared to the long-term costs and negatives of the herbicide alternative we fully believe that you will not only see a reduction in expenditure, but that you will also see an improvement in yield which will in turn improve your profit margins. This is because the robots don’t touch the crops, so there is no spoilage along the way.

Do you use herbicides and believe they are the better option? Perhaps you have moved over to precision farming and have already got robots doing the weeds? How is it working out for you? Have you been doing it long enough to feedback to the smart agriculture community the value? We are very excited about robots doing the weeding and expect that it will transition from commercial to domestic equipment soon as well. Let us know your thoughts below!